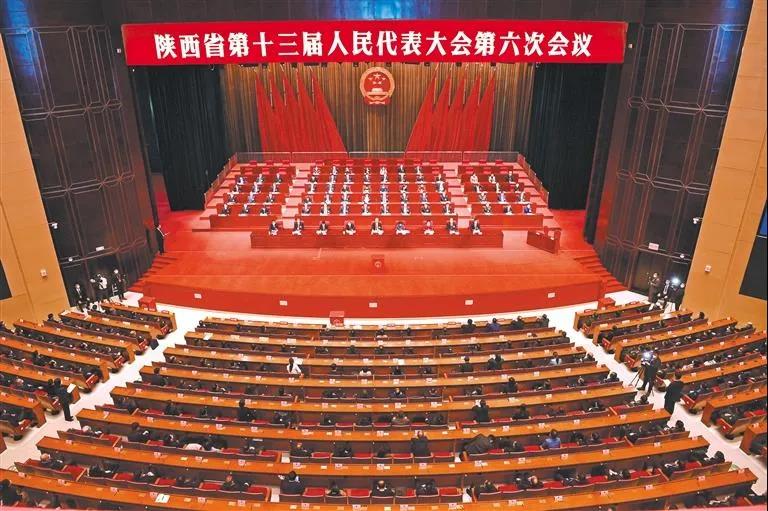 Liu Guozhong presided over the meeting and delivered a speech. Report on the Work of the Government and other resolutions were voted through, and the election and constitutional oath were conducted.

With the successful completion of the agendas, the Sixth Session of the 13th Shaanxi Provincial People's Congress and the Fifth Session of the 12th Shaanxi Provincial Committee of the CPPCC were successfully concluded in Xi'an. Liu Guozhong expressed, over the past few days, the representatives and members attending this year's two sessions of Shaanxi Province performed their duties in accordance with the law and actively contributed suggestions with the theme of "Writing a New Chapter in High-quality Development of Shaanxi", fully demonstrating the sense of being responsible for the people and the mindset of forging ahead in a pragmatic manner. The goals of the conference were achieved as planned. The conference is the one for holding high the banner of socialism and increasing solidarity and confidence.  Guided by  Xi Jinping Thought on Socialism with Chinese Characteristics for a New Era, the conference comprehensively implemented the guiding principles of the 19th National Party Congress and the plenary sessions of the 19th Central Committee, thoroughly studied and implemented the spirit of the important speeches and instructions made by President Xi Jinping during his visit to Shaanxi, conscientiously implemented the requirements of the Tenth Plenary Session of the 13th Shaanxi Provincial Party Committee and the Economic Work Conference. The conference also deployed the province's economic and social development and other work in 2022, and clarified the objectives, tasks, and initiatives, surely inspiring all in the province to unite as one and win the battle of epidemic prevention and control and break new ground in various undertakings in Shaanxi's with a more vigorous spirit.

2021 is a milestone year in the history of the Party and the country and an extraordinary year in the development course of Shaanxi, during which General Secretary Xi Jinping once again visited Shaanxi and mapped out the blueprint of writing a new chapter in Shaanxi's high-quality development.

Liu Guozhong once again pointed out that this year, the National Games, Special Olympics, and Paralympic Games were successfully held, marking a new era of Shaanxi; this year, the high-quality project has been well carried forward, innovation-driven development was accelerated, the battle against poverty reflected good results, and a moderately prosperous society was built up as scheduled, indicating a good start of the 14th Five-year Plan period. At the end of 2021, in the face of the outbreak of the COVID-19, the general public, especially the medical workers, public security police, community workers, journalists, and volunteers, jointly brought the daily new confirmed cases down to single digit over a month. Upon all the hard work this year, we look forward to a better future, and we thus have more confidence in overcoming all kinds of difficulties and hardships on the new journey! The 20th National Congress of the CPC will be held this year, which is crucial for implementing the 14th Five-Year Plan. The 14th Provincial Congress of the CPC will also be held this year. We must have firm confidence and spare no efforts to minimize the damage caused by the epidemic, to build a stable and healthy economic state, so as to achieve high-quality development and new progress. Let's carry forward the great spirit of party building and the spirit of Yan'an, make further efforts to start a new chapter of high-quality development in Shaanxi, and welcome the 20th National Congress of the CPC.