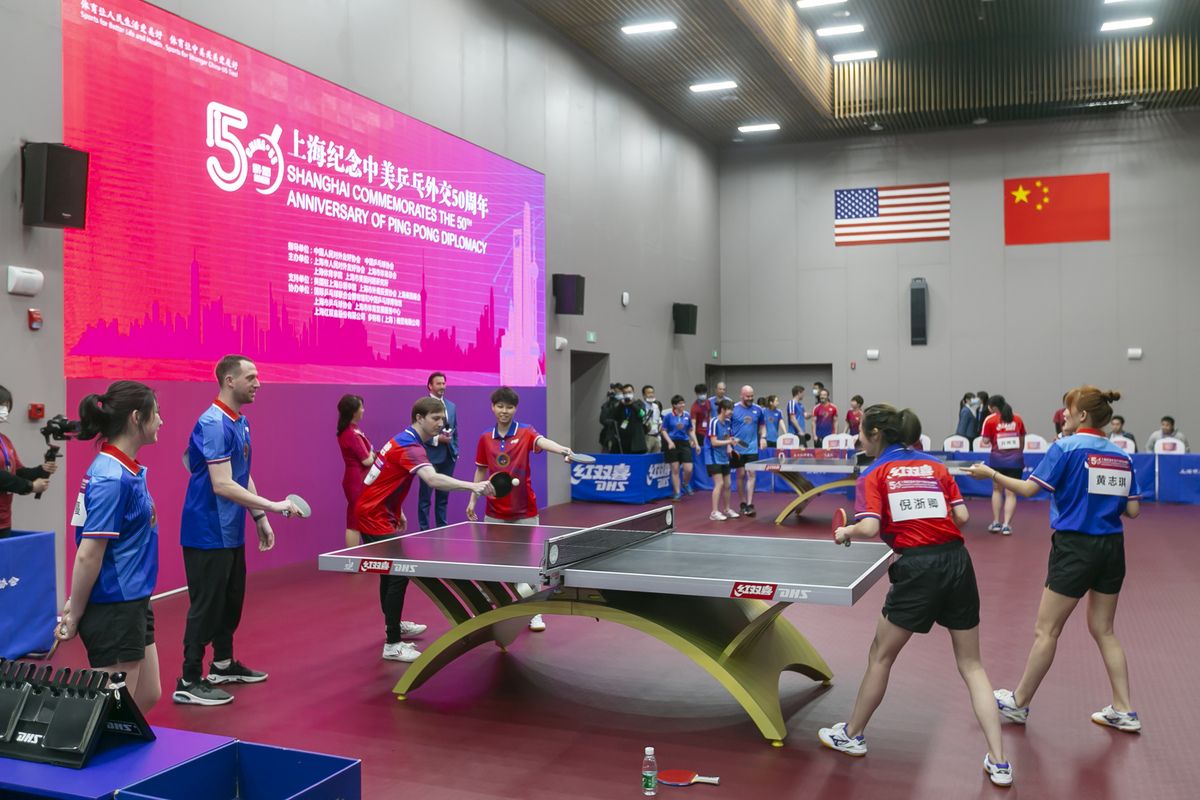 Players from both sides participate in a China-US Ping-Pong friendly match during a special event in Shanghai, China, April 10, 2021. [Photo/Xinhua]

Input encouraged by Jimmy Carter in stressing US, China must move ahead

Former US president Jimmy Carter has called on young scholars in China and the United States to help find ways to enable the countries to stabilize relations that have come under increased strain over recent years.

Carter made the comment in a letter of greeting to the Fifth China-US Young Scholars Forum held virtually on Friday.

Of the bilateral relationship, he urged participants to explore paths that can determine "which differences must be overcome to stabilize the connection and ensure its preservation in the decades to come".

In the letter, Carter said: "When (then) vice-premier Deng Xiaoping and I announced our decision to normalize diplomatic relations in 1978, we knew that we were opening an era of peace and opportunity for both nations."

The Democratic president held office for a single term from January 1977.

Carter encouraged the young scholars to help manage the bilateral relationship so the countries can confront issues such as climate change, pandemics and nuclear proliferation.

In Beijing in 2011, he celebrated the 40th anniversary of what the world came to know as ping-pong diplomacy.

The forum also commemorated the 50th anniversary of this diplomacy, which fostered goodwill between the US and China.

More than 20 former diplomats and US-China experts participated in the discussion.

Liu Yawei, director of the China Program at the Carter Center, reviewed the history of ping-pong diplomacy, which began with spontaneous gestures of friendship exchanged among US and Chinese competitors in the sport in Nagoya, Japan, in 1971.

As a result, 50 years ago on April 10 a group of young players became the first US citizens to enter China after 1949, initiating the ping-pong diplomacy that ultimately led to the establishment of diplomatic relations between the two countries in 1979.

He Yafei, former Chinese vice-minister of foreign affairs, and Stapleton Roy, former US ambassador to China, said a reassessment of the relationship is needed, as there is much for both sides to gain from collaboration.

"Strategic competition between the US and China is a reality today that nobody can ignore," He said. "It may not be what China wants. Unfortunately, it resulted from, I believe, the misjudgment based on US retrospection about the bilateral relations over the years."

He said the most urgent thing to do now is to redefine the ever-evolving bilateral relationship and design a new path forward.

"As the balance of power keeps evolving in favor of developing countries represented by China and others, a new pattern of major power relationship will eventually emerge," He said.

Roy, drawing on the Cold War, said the unraveling of the Soviet Union meant the US emerged as the sole global superpower in the early 1990s, "a position … which was inherently inconsistent with our most fundamental political principle, which is that concentrated power is dangerous and must be checked and balanced".

"Thirty years later, we have a better understanding of the danger associated with unchecked power in the international arena. What I am saying is, we abused our power because it wasn't checked and balanced the way it was during the Cold War," he added.

From that standpoint, Roy said, the rise of China is a good thing, as is the transition to what he called a multi-level world.

Roy also dismissed talk in some US media of the potential for a war between the two countries.

"This is dangerous nonsense. It does not understand the nature of the danger of nuclear confrontations, the difficulty of controlling escalation, and we need somehow to find a way to engage one another."