China announced its top 10 archaeological discoveries of 2020 on Tuesday, including an 8,000-year-old shell mound, granaries from about 4,000 years ago and a 6th century graveyard.

A panel of 21 scholars and archaeologists selected the 10 findings from a shortlist of 20 new archaeological discoveries from across the country.

The annual selection, announced by the National Cultural Heritage Administration, aims to introduce new bites of history and culture to the public.

Here's a round-up of the sites that made the list's 2020 edition:

The Zhaoguo Cave site in the Gui'an New Area, southwest China's Guizhou Province, spans the Paleolithic to Neolithic periods, between 12,000 and 45,000 years ago. The ruins feature a large number of cultural artifacts, including 51 fire relics, two tombs, stone carvings, polished bones and remains of animals and plants.

The findings provide precious clues to studying the living conditions of the hunter-gatherers of southwest China during the Pleistocene Epoch, and are a strong evidence indicating the early-stage usage of fire.

The Jingtoushan shell mound site, dating back around 8,000 years, was first discovered in Yuyao, east China's Zhejiang Province in 2013. More than 400 pieces of pottery and wares made from bones, shells and wood have since been unearthed.

The ruins, covering a total of over 20,000 square meters, are one of the largest and oldest prehistoric shell mounds excavated in China, guiding research and study on the environmental change in coastal areas.

From 2013 to 2020, Chinese archaeologists carried out a series of archaeological excavations at the Shuanghuaishu site and its adjacent areas in the central province of Henan, and found a large number of relics from the Yangshao Culture dating back 5,000 to 7,000 years, which support the theory that the Chinese civilization is over 5,000 years old.

With an area of 1.17 million square meters, the Shuanghuaishu site is located on the south bank of the Yellow River in the township of Heluo, Gongyi City. It was proposed the location be named "Heluo Kingdom."

Dating back 2,000 to 1,700 BC, the Shizhuang site, located in Zhoukou City, central China's Henan Province, is the earliest-known evidence of a fortified city of barns in the country. It also offers exceptional reference to study early-stage managing systems for food supply in ancient China.

Archaeologists have discovered the remains of 28 granaries dating back about 4,000 years at the 100,000-square-meter site. The granaries are believed to be among the country's earliest centralized grain storage facilities.

Located in Luoyang, central China's Henan Province, the Xuyang Cemetery is a tomb cluster belonging to the ancient Rong migrants. It is the first discovery of Rong remains in the Central Plains region. The site shows the blend of rituals of central China and other ethnic groups in western China today.

Excavation work at the cemetery started in 2013, with 150 tombs unearthed so far, including 12 large and medium-sized ones. 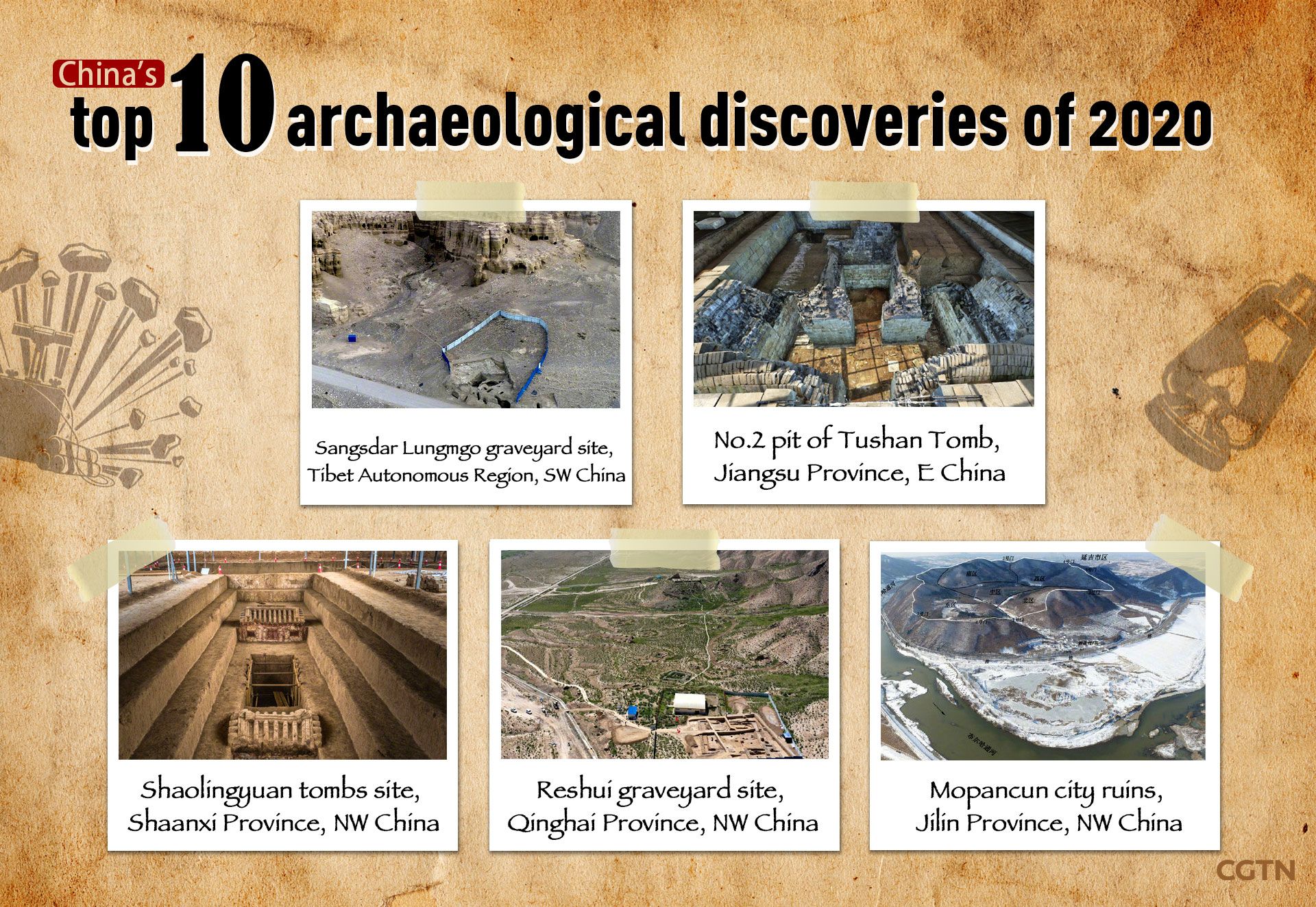 The site, where one stone tomb and 52 cave tombs were discovered along with a large number of Tibetan artifacts, provides some key findings about the early-stage history of Tibet, and shows frequent communication among the region with the area to the south of Himalayas as well as Xinjiang and other places.

No.2 pit of Tushan Tomb

The Tushan Tomb, located in Xuzhou, east China's Jiangsu Province, is home to three huge tombs, including one excavated from the No.2 pit that features a large and complex structure.

Dating back to the Eastern Han Dynasty (25 to 220), the tomb was built by more than 180 workers, using over 4,200 pieces and nearly 1,000 cubic meters of stone. It is believed to be the tomb of Liu Ying, the second generation king of Chu Kingdom.

The Shaolingyuan tombs site in Xi'an, northwest China's Shaanxi Province is a cluster of tombs of high-level officials during the Sixteen Kingdoms period (304-409).

A total of 278 funerary objects, such as pottery figurines, as well as sand buildings and murals were found at the site, which are of great value to the study of the structure and system of large-scale high-level tombs in ancient China.

The Reshui graveyeard site, dating back to the Tang Dynasty (618-907), is an archaeological site of around 300 tombs in Dulan county, northwest China's Qinghai province. Xuewei No.1, a major tomb found at the site, is the most complete ancient tomb ever excavated on the Qinghai-Tibetan Plateau.

With a large number of cultural relics such as jade wares and sites for religious sacrifices unearthed, the site shows cultural exchanges between Tang and other regions inhabited by non-Han ethnic groups, and supported studies related to the Silk Road.

Dating back the early 13th century, the Mopancun city in Tumen, northeast China's Jilin Province is believed to be the capital city of the regional regime of Dongxia, which existed from the Jin (1115-1234) to the Yuan (1271-1368) dynasties. More than 5,000 cultural relics and artifacts were unearthed there with seven city gates found.