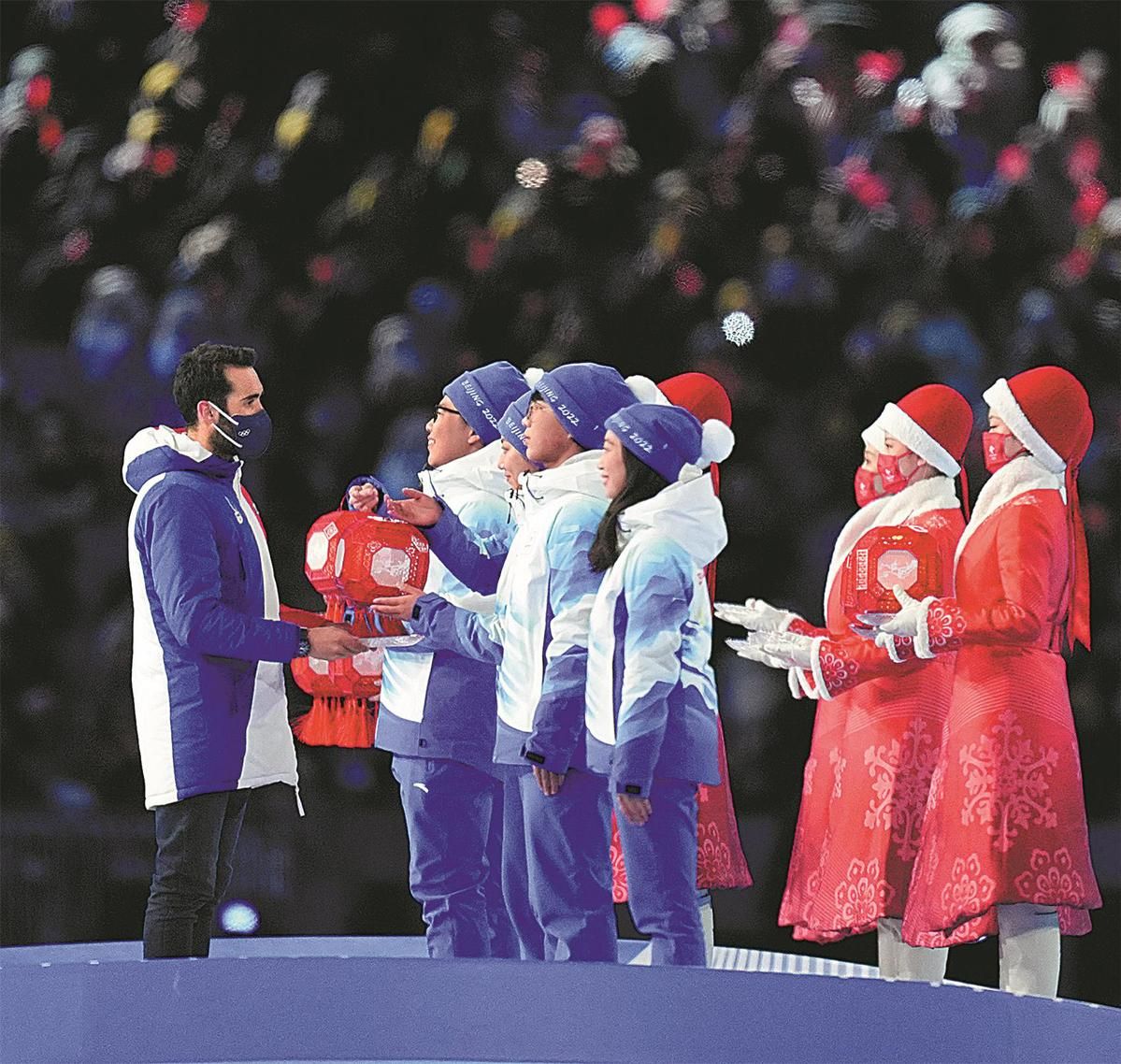 Representatives of volunteers for the Beijing 2022 Winter Olympics are given souvenirs on Sunday in thanks for their service during the Games' closing ceremony at the National Stadium in Beijing. JU HUANZONG/XINHUA

With the Olympic flame extinguished following a farewell party, Beijing capped the 2022 Olympic Winter Games to resounding global acclaim on Sunday for bringing the world together through the power of sports at a challenging time.

As the first major international sporting event held on schedule amid the COVID-19 pandemic, the Winter Games concluded in a memorable way after International Olympic Committee President Thomas Bach declared its closing, witnessed by President Xi Jinping at the iconic National Stadium in Beijing on Sunday night.

The closing ceremony, which featured artistic performances and athlete parades, brought the curtain down on an extensive display of thrilling sports action, friendship and mutual respect among 2,877 athletes from 91 national and regional Olympic committees at safe and well-organized Games, despite unprecedented challenges amid the pandemic.

During 19 days of outstanding performances on the ice and snow, 17 Olympic records, including two world records, were broken, while gold medals were awarded in a record number of 109 events at the most gender-balanced Winter Games to date, where 45 percent of athletes were female. 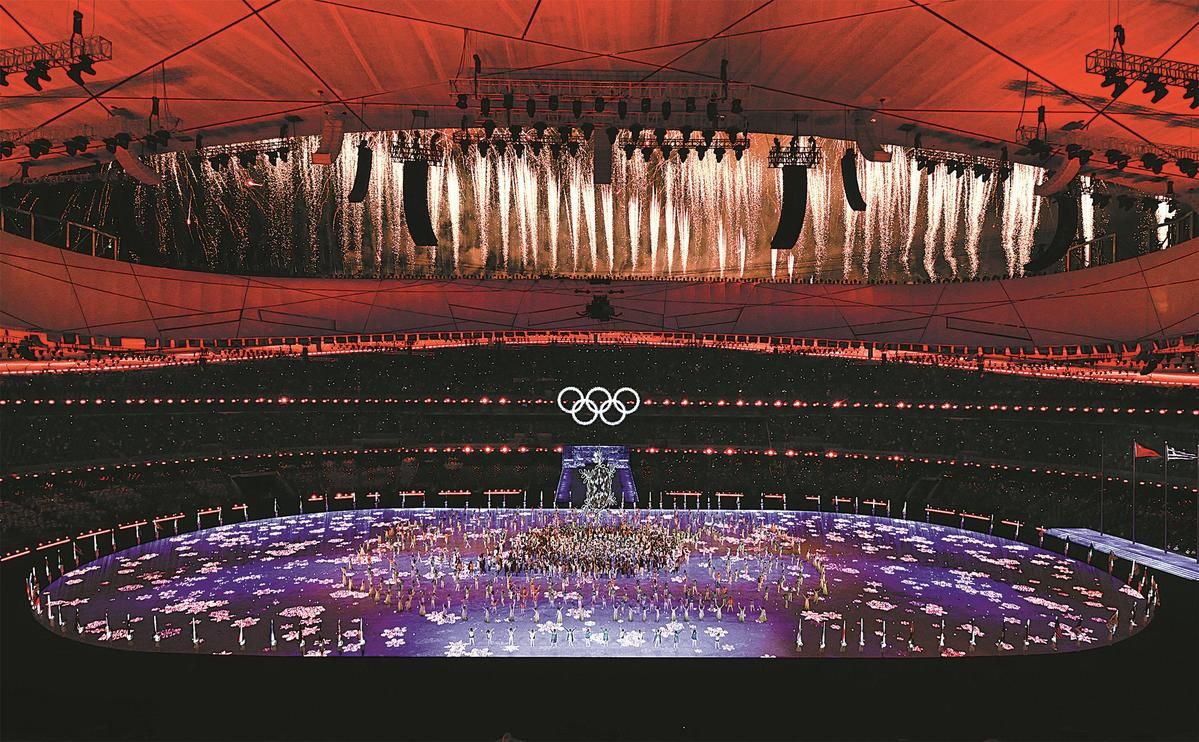 Fireworks light up the stadium during the closing ceremony, which featured artistic performances and athlete parades. Beijing has made history as the first city ever to host both summer and winter editions of the Olympics. LI HE/XINHUA

Highlighted by breakthroughs in snow sports, the host delegation bagged a national record haul of 15 medals, including nine gold, to finish third in the gold medal standings, its highest ever since China's Winter Olympics debut at the 1980 Lake Placid Games in the United States.

With the world facing common challenges such as the rampaging Omicron variant of coronavirus and geopolitical tensions, the Chinese organizers' relentless efforts to set up an equal stage for athletes to compete fiercely, yet live in peace and respect under one roof in a safe environment, earned appreciation from around the world.

"You overcame these divisions, demonstrating that in this Olympic community we are all equal－regardless of what we look like, where we come from, or what we believe in," Bach said during the closing ceremony. "This unifying power of the Olympic Games is stronger than the forces that want to divide us.

"The Olympic spirit could only shine so brightly because the Chinese people set the stage in such an excellent and safe way," he added. "Our deepest thanks and gratitude go to the organizing committee, the public authorities and all our Chinese partners and friends. On behalf of the best winter sport athletes of the world, I say: Thank you, our Chinese friends."

With the successful delivery of the 2022 Games, Beijing has made history as the first city ever to host both summer and winter editions of the Olympics.

Members of the Chinese delegation, which won nine gold medals, four silver and two bronze at the Beijing Games, celebrate when they appear at the closing ceremony. ZHANG WEI/CHINA DAILY

Cai Qi, president of the Beijing 2022 organizing committee and secretary of the Communist Party of China Beijing Municipal Committee, said, "The Olympic Winter Games Beijing 2022 opens a new era for winter sports. It is yet another extraordinary example of humanity coming together for a shared future. The Olympic spirit will live on forever."

The event's closed-loop management, which required all Games participants to move only between their designated accommodation facilities and competition, training and working venues via official transportation that kept them separated from local communities, proved sound and effective. It kept athletes safe within the loop while preventing any imported cases from spreading to the outside public, paving the way for hosting more major international events safely even with the pandemic remaining.

"It was one of the safest places on the planet, if not the safest place, and this is a great achievement," Bach said of the Winter Games' closed loop at a news conference on Friday.

Although entering China with concerns about the strict COVID-19 protocols, many athletes have hailed their stay in Beijing as a reassuring experience that helped them focus on the competition.

"I've had an opportunity to speak with some athletes, and their experiences to date have been tremendous," said Rick Adams, the US delegation's chef de mission, during the Games. "The care which has been taken around the most important thing, the health and safety of the athletes and the entire delegation, has been very impressive."

Performers representing the Italian cities of Milan and Cortina d'Ampezzo, hosts of the 2026 Olympic Winter Games, participate in the closing ceremony. CAO CAN/XINHUA

"From what I've experienced so far, China has a wonderful culture," Canadian Olympic champion curler John Morris said after a mixed double curling game. "They're very friendly, very respectful, and they've been great to us."

The cheerful atmosphere during the athletes' parade into the closing ceremony, where Olympians, regardless of their different uniforms, all danced and celebrated to the same beat of Beethoven's Ode to Joy, turned the National Stadium, also known as the Bird's Nest, into a lively party despite the wintry chill.

According to the traditional protocol of such closing ceremonies, Chen Jining, the mayor of Beijing, handed the Olympic flag to IOC President Bach, who passed it to the mayors of the Italian cities of Milan and Cortina d'Ampezzo, to raise the curtain on the next Winter Olympic Games, which will be hosted by Italy in 2026.