Stepping out again in this storm, Standing side by side with Chang'an University 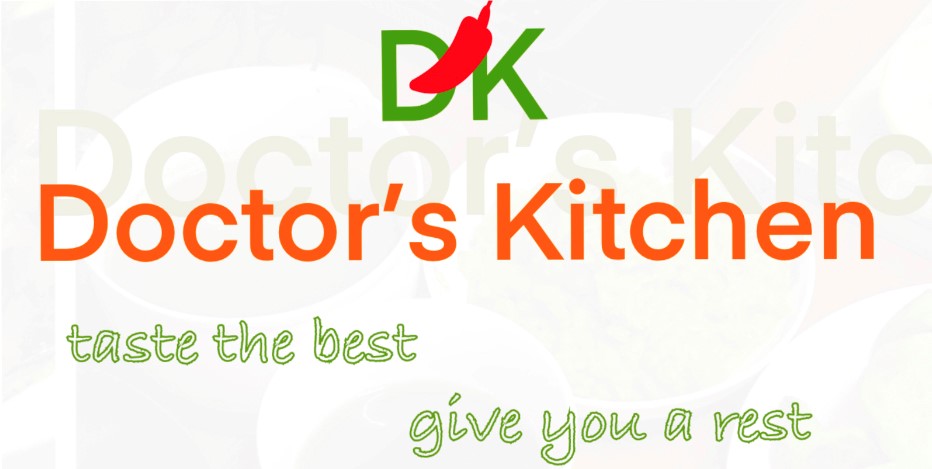 Amid the COVID-19 outbreak back in early 2020, Philemon Lindagato from Rwanda, a doctoral candidate majored in geology at Chang'an University, co-founded this "Doctor's Kitchen" with other 2 doctoral candidates (Nasry from Bangladesh, major in Environmental Engineering and Amit from India, major in Environmental Science). While in epidemic, the university implemented closed-off management, it was hard for students to go out for purchasing and order takeouts. Therefore, Linda (short version of Lindagato), together with his teammates, purchased the ingredients and cooked the food all by themselves, then delivering the food packages to the students on campus. 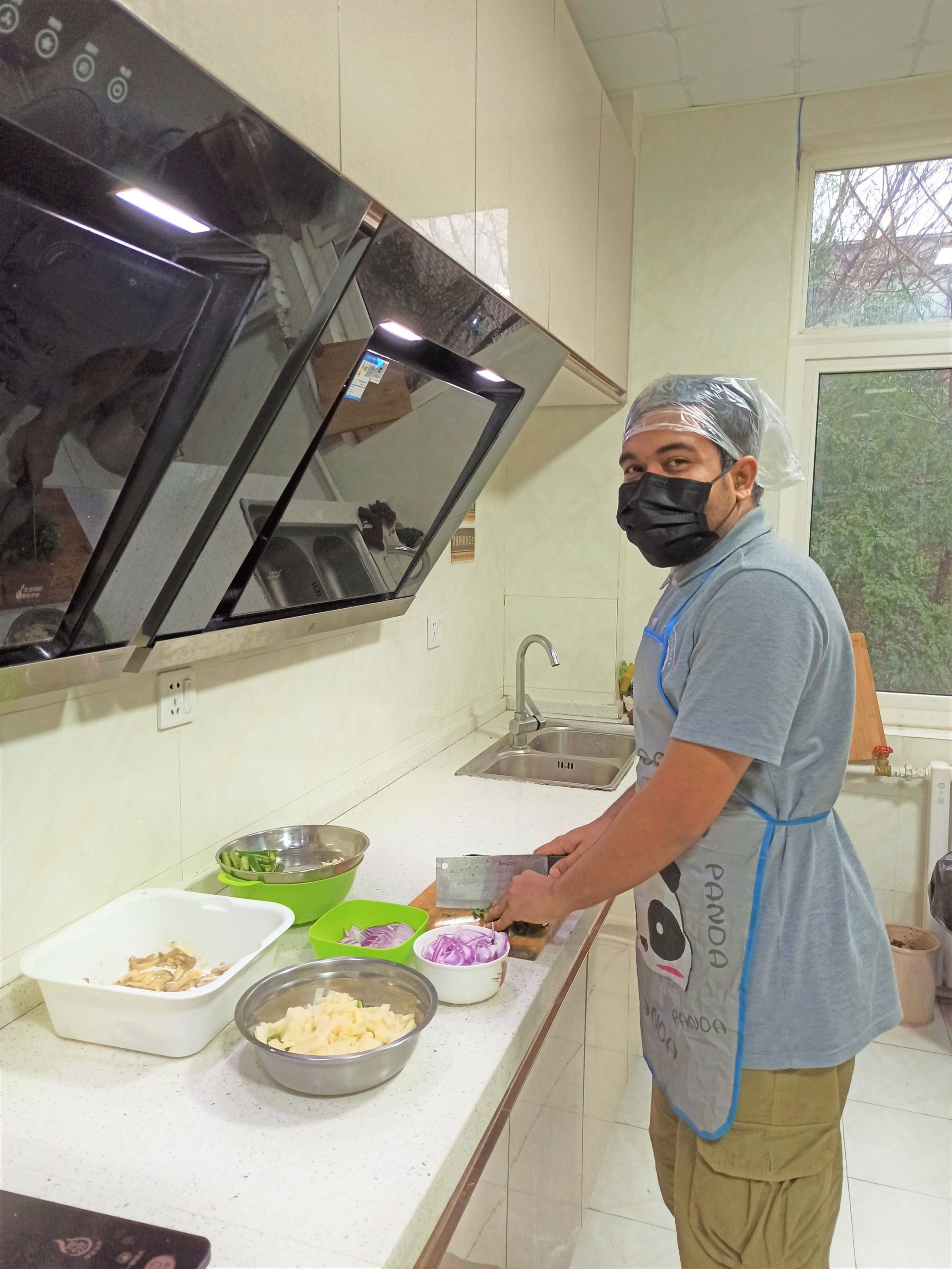 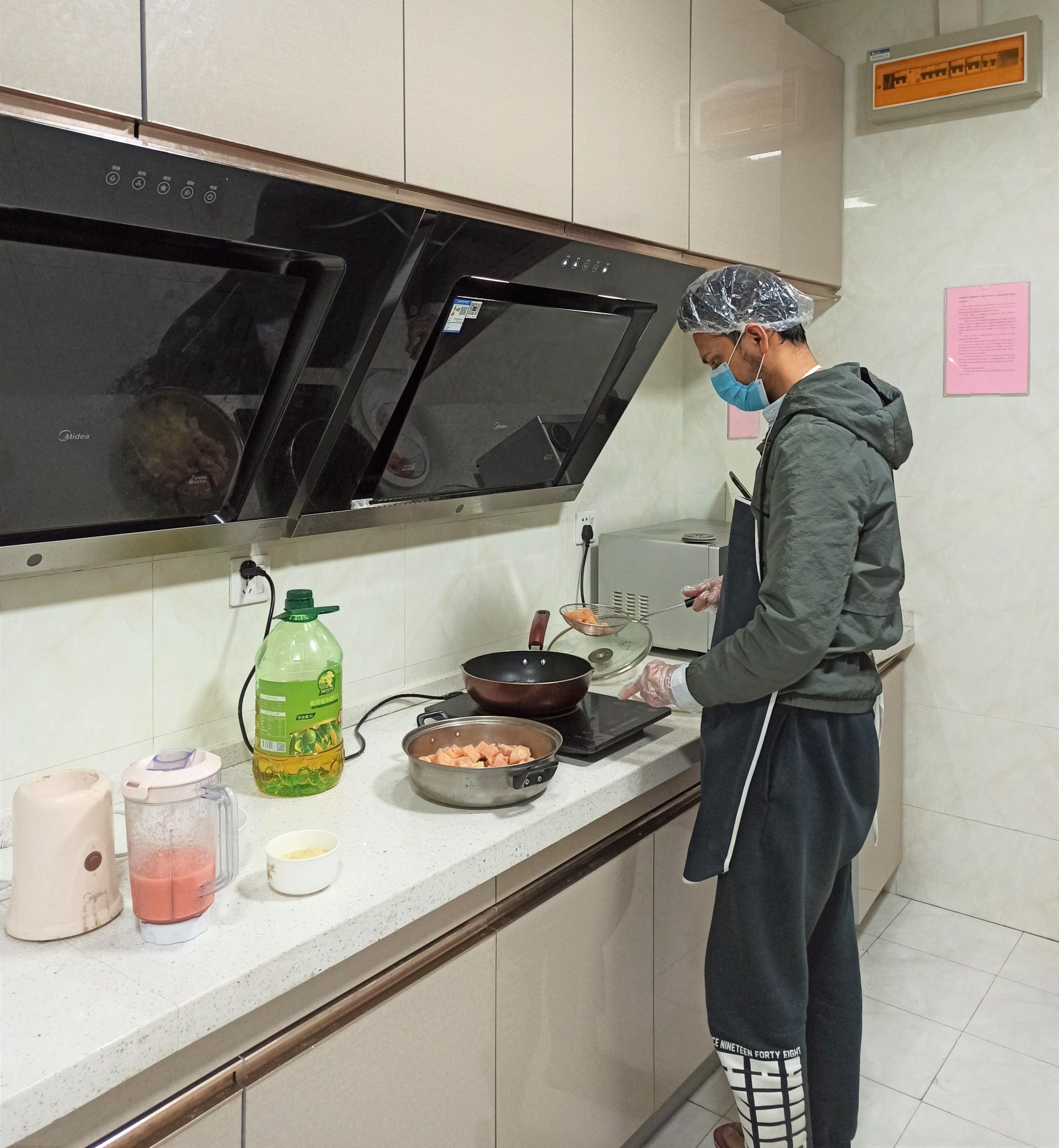 Time flies real quick, almost 2 years passed since then. While in the middle the epidemic comes and goes, citizens of Xi'an have spent quite a comforting and peaceful time. Linda, Nasry, and Shuvo (another postgraduate student from Bangladesh studying Business Management in CAU and new member who joined in 2021), the current members of the team, have been busy working on academic projects, organizing and participating school activities, also taking orders from some international students every now and then. However, almost at the end of the year 2021, Xi'an was confronted with this sudden resurgence of COVID-19, spreading all over the city. Every variation related to the epidemic on each day just jangled the nerve of the citizens. All three of them who lived outside the campus just constantly worried about the situation of their schoolmates and teachers.

Key time points of CAU during the epidemic

On the same day, the Office of the Leading Group for Epidemic Prevention and Control of Chang'an University issued the first "Notice to All Teachers and Students", and immediately implemented the closed-off management for each campus and conducted nucleic acid testing for all people on campus.

From December 19th, the residential area and the northern dormitory area of the main campus at Yanta District was adjusted to high-risk areas.

Since the first confirmed local case reported on December 9th last year, the prevention and control measures in the city have been tighter and tighter. To further avoid the risk of infection, CAU reinforced the related measures. For the students on campus, especially the international students, it became even harder for them to purchase the food they need, since they have different cultural backgrounds and hold different religious beliefs. At this moment, members of the Doctor's Kitchen thought it was time for them to take action again.

Constant caring for the food of international students on campus 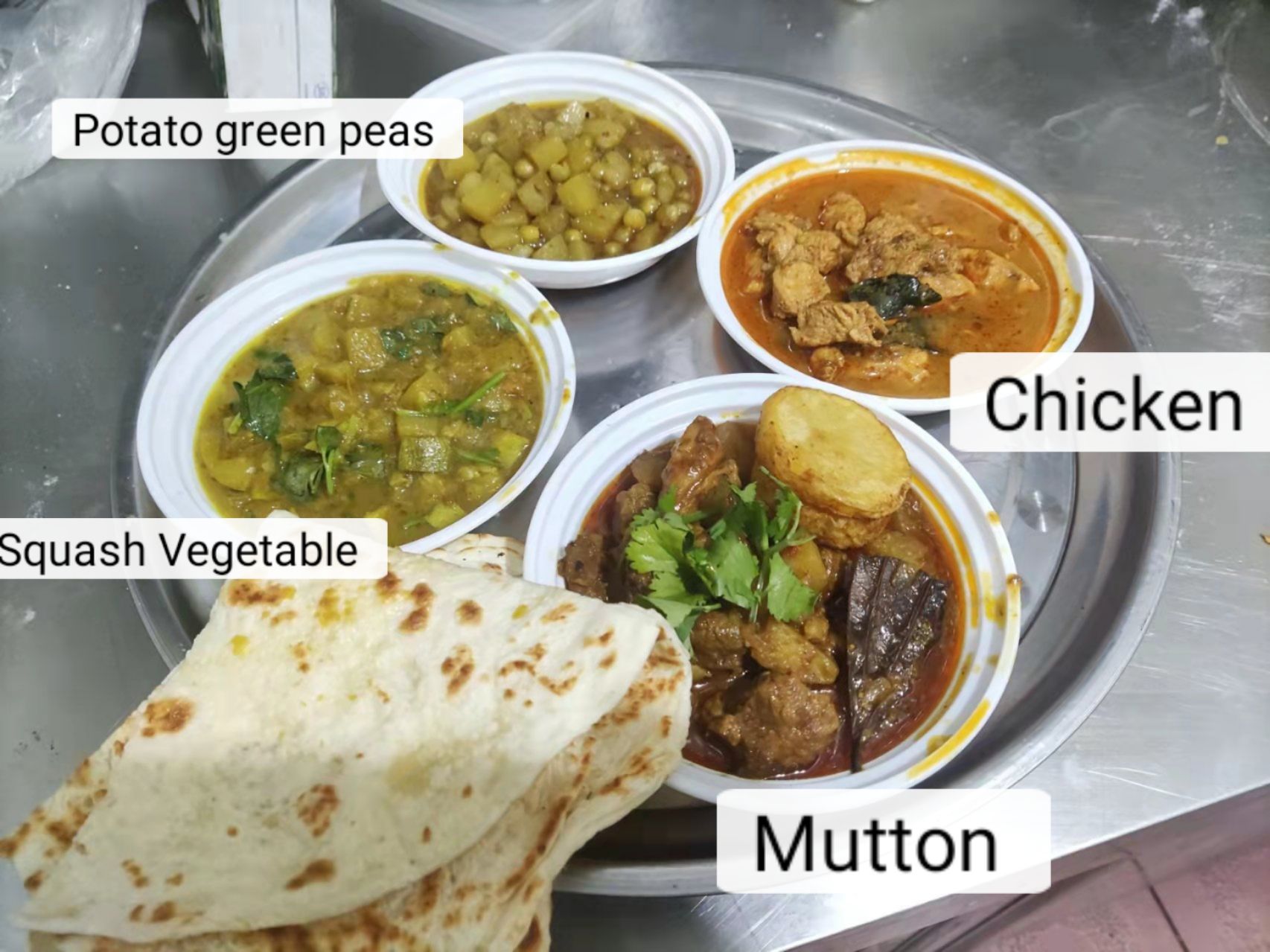 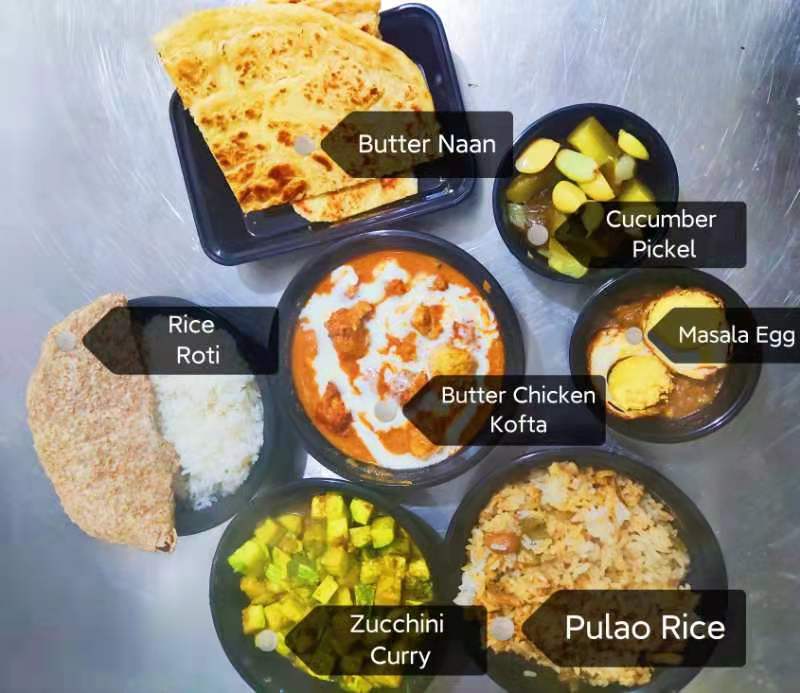 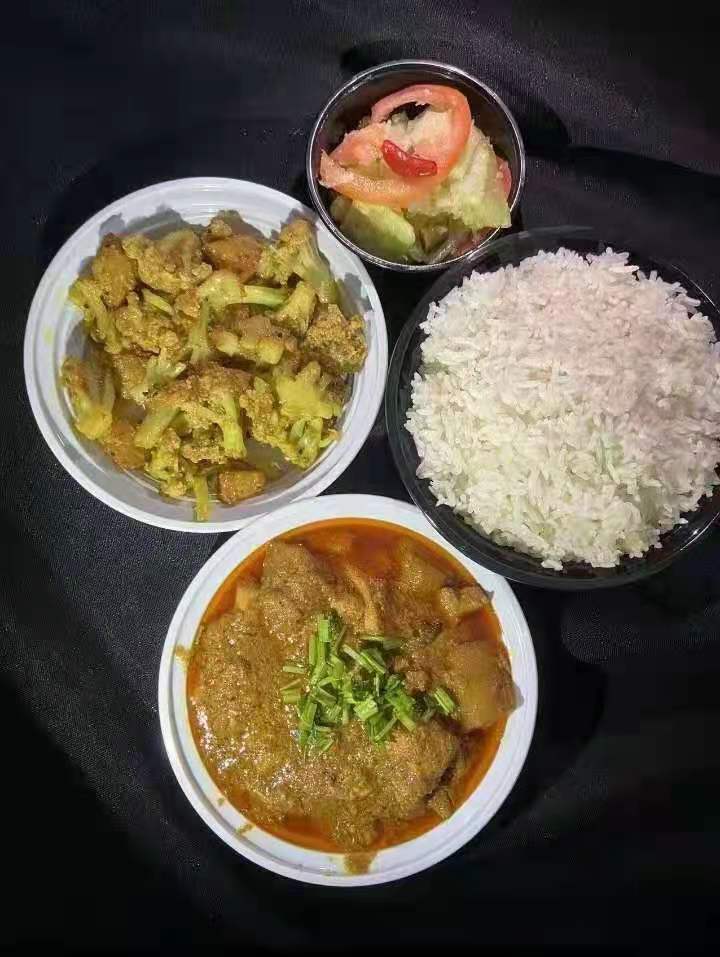 During a couple of days before the closed-off management was implemented in CAU, we tried our best to deliver food for the international students. They were really excited to have this nutritious food that could match their special needs, so they just kept placing the orders. In this short period, we basically covered the food of 70% of the international students at Yanta campus.

While we processed the delivery for three days, the situation of Yanta campus and surrounding communities was getting tougher, with new cases rising. So the university implemented closed-off management. At the beginning of the shutting down, our biggest worry was that students might not get ready for this abrupt close. It was possible that they did not have extra storage of food and they were worried about the possible suspension of our services as well. 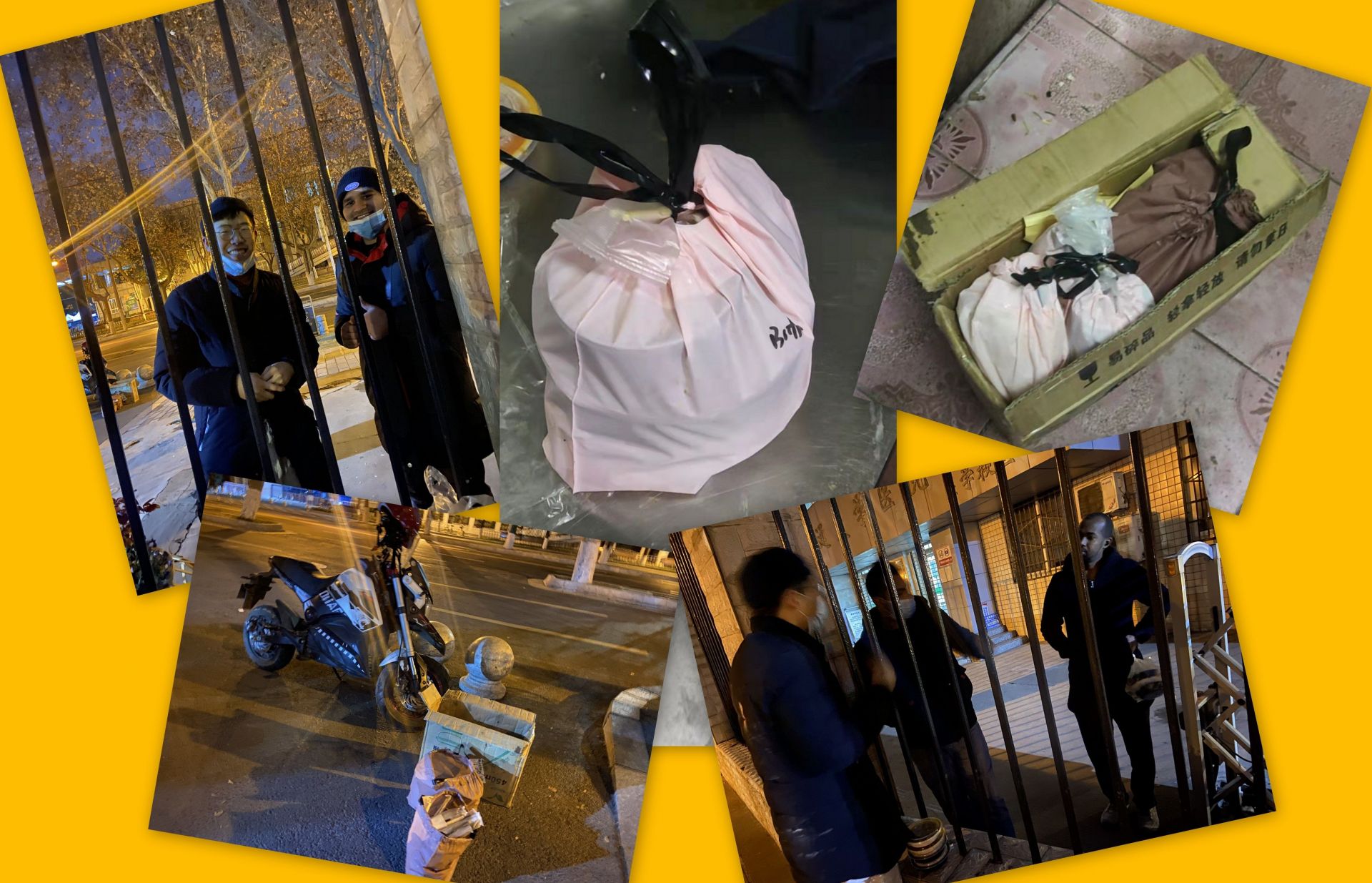 Since the shutting down on December 15th, we still managed to deliver the food on both 16th and 17th, but only to the international students staying at Yanta dormitory (outside the campus). We dropped the food at the gate and students could collect them from the gate accordingly. From December 18th, though, the university further intensified the prevention and control measures, all the students and international students at Yanta dorm could only stay inside the dorm. But then we heard that the university also started providing free meals to all the students during each day, and we felt relieved. Since then, we suspended the delivery for CAU.

Extended support to other universities

In the meanwhile, we learned that students of other universities were also restricted to mobility, and there were quite a few international students who needed our support. We started to introduce ourselves online so the students were getting to know what we do. They started placing orders. During this time, we reached Xi'an Jiaotong University and Shaanxi Normal University, and the feedback was pretty good. They strongly welcomed our continued support, which was the biggest motivation for us to march forward. 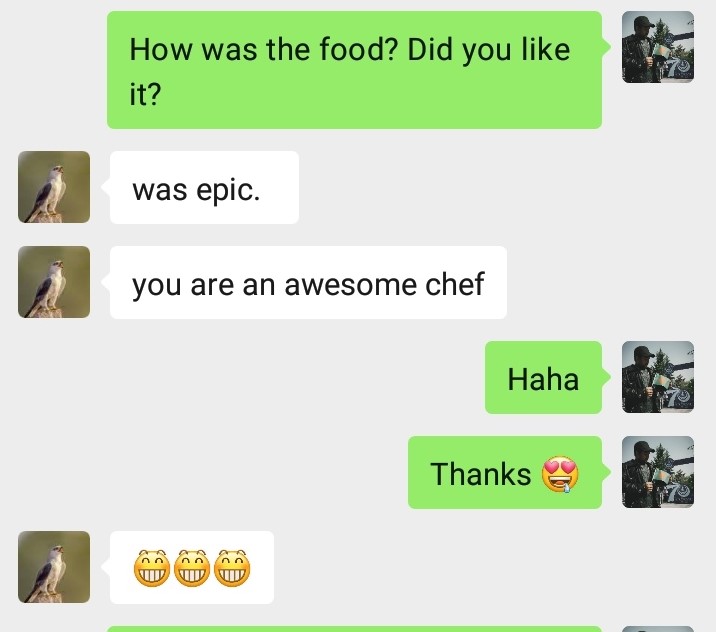 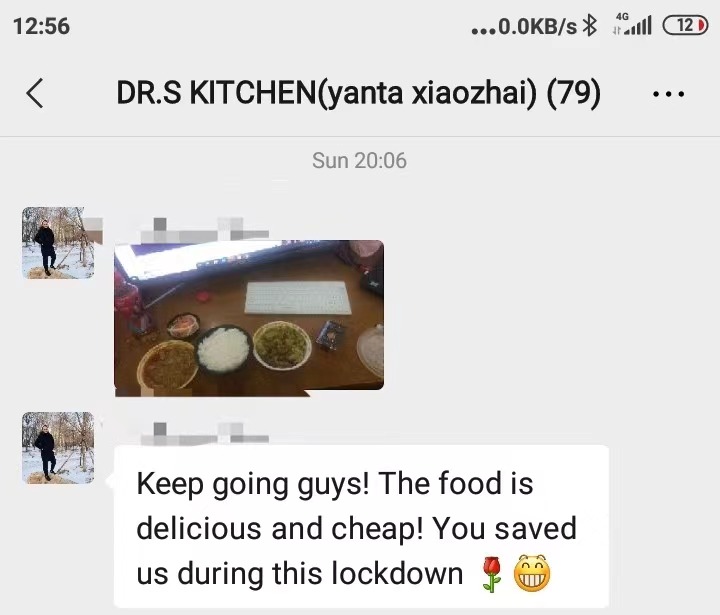 However, soon the entire city went into lockdown, and we could no longer deliver by ourselves. Before that when we were still able to exit and enter the community, I (Nasry) was in charge of the advertisement and order management, while Shuvo usually rode the bike to make deliveries to universities. Since the lockdown, we were also prohibited from going outside, and we could no longer fulfill our duty as the "rider".

CURRY UP reached out just in time 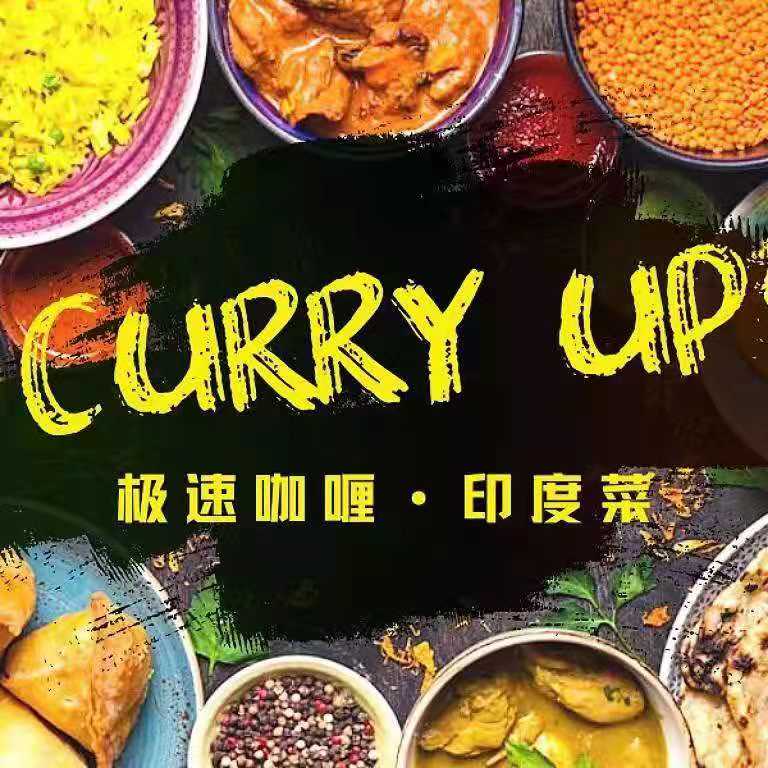 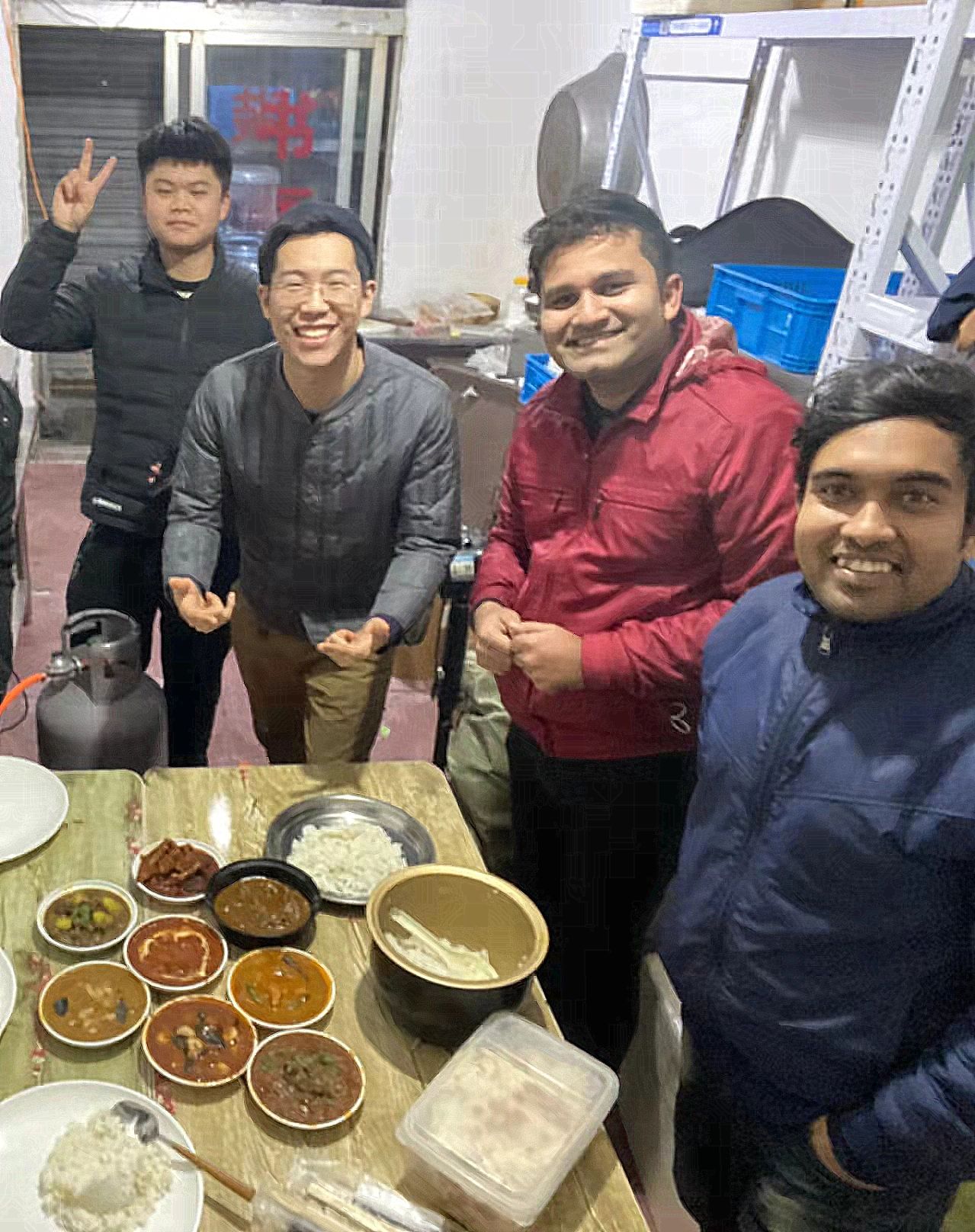 However, we were so lucky to have this new partner CURRY UP who actively reached out, and we were thus able to sustain the service for the international students at Yanta District for a while. CURRY UP as an independent merchant not only offset our burden of preparing the food but also helped coordinate the riders on Meituan and Ele.me. Then we could focus on order management and advertisement. It was actually an interesting story about how we got connected to CURRY UP. We used to dine in CURRY UP frequently and we were really fond of the authentic flavor of southern Asia they presented. During this special time, Tom, the owner of CURRY UP, reached us in the first place when he knew that we were facing major challenges. Then we started to jointly serve the international students on campus.

Vision of Doctor's Kitchen and CURRY UP moving forward 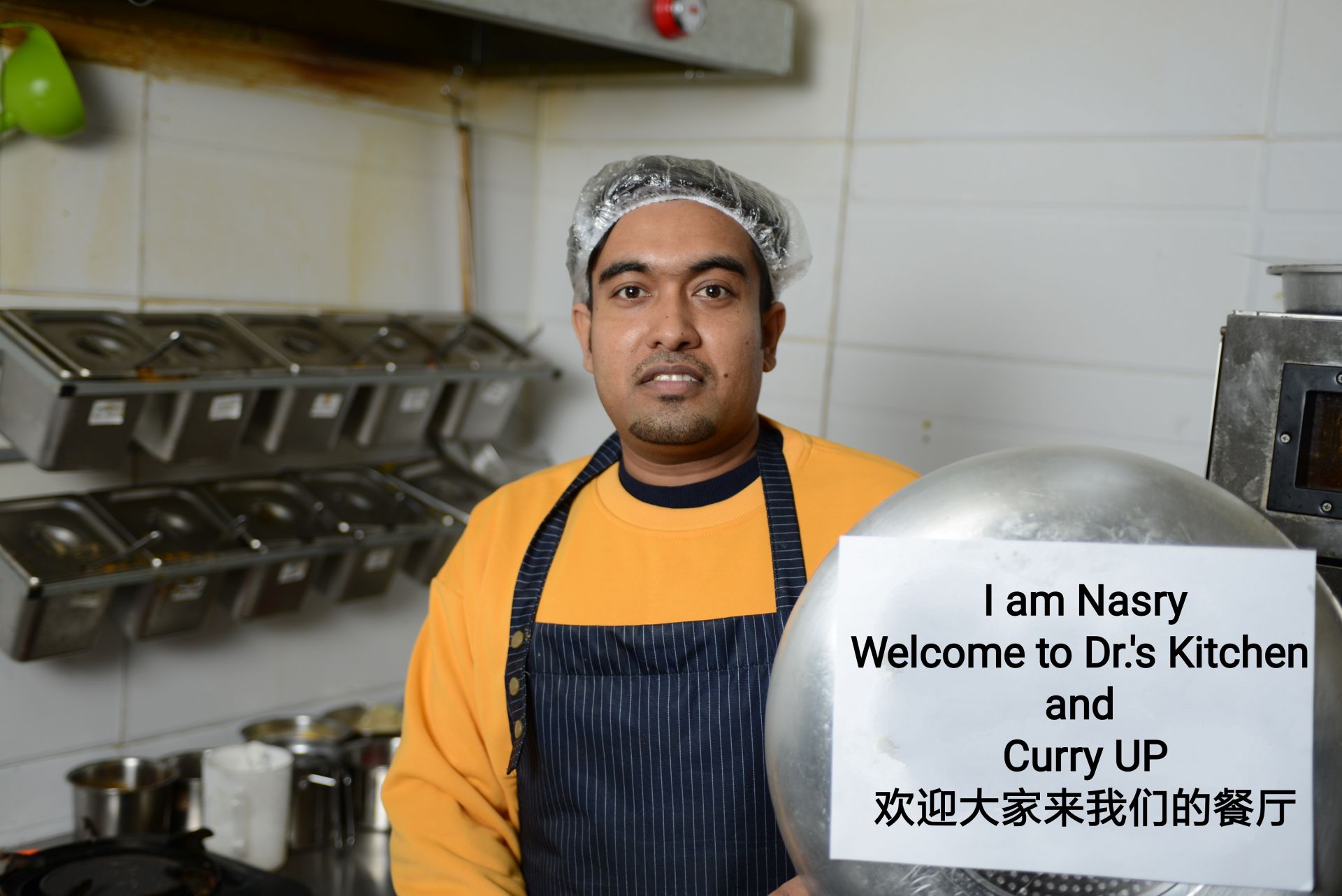 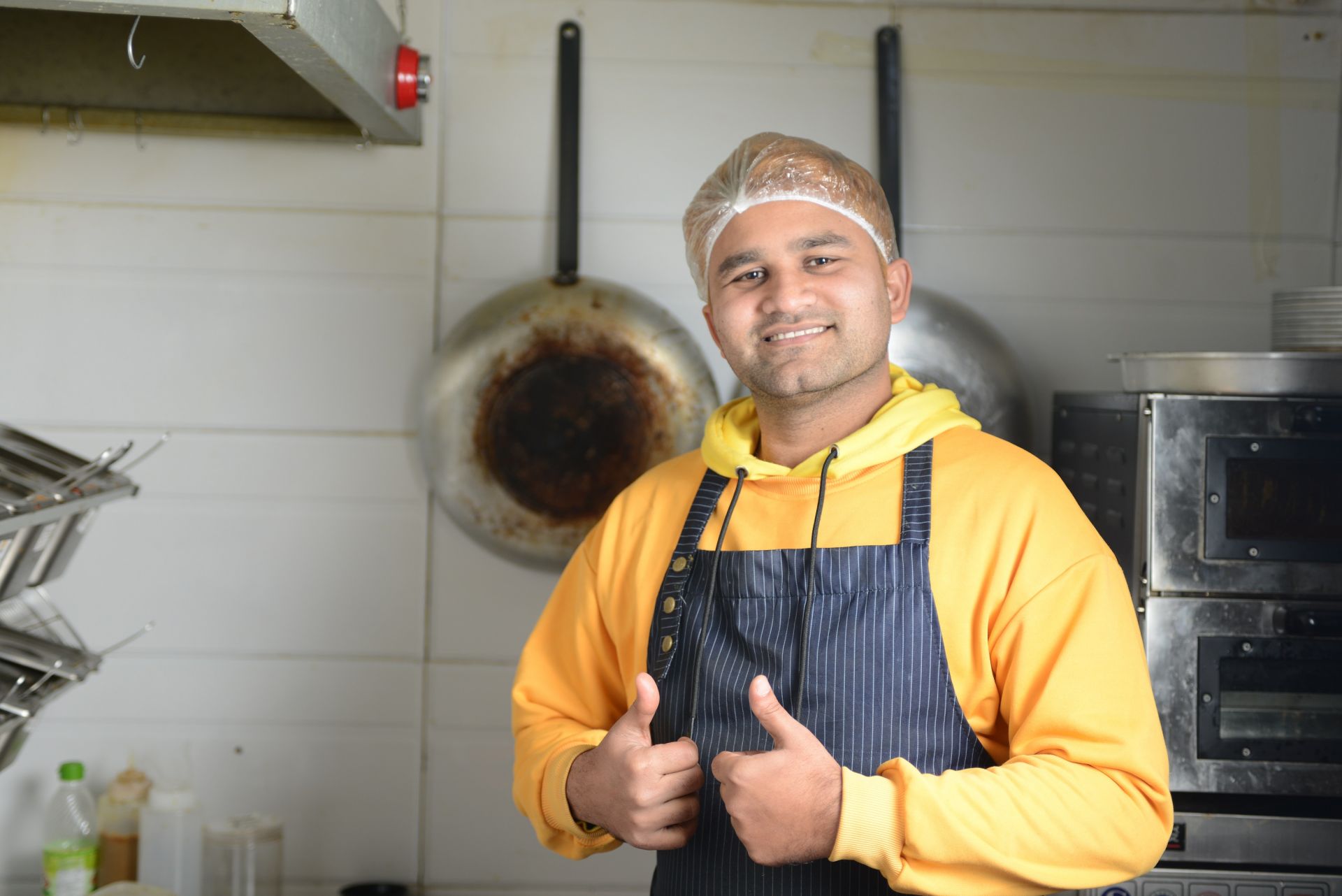 ( photo taken before the epidemic)

In terms of operating this Doctor's Kitchen during the epidemic, our original aspiration has always been making our contribution to our peers, our university and even the city, with our specialty and resources. We hope that the city can be back on track soon, bustling as always. And we will be continuously motivated.

From 0:00 on Jan 13th, risk level of some school buildings and residential areas of CAU at Yanta District was lowered down. Hope is around the corner.

Thanks Linda, Nasry, Shuvo, Tom for interview and pics