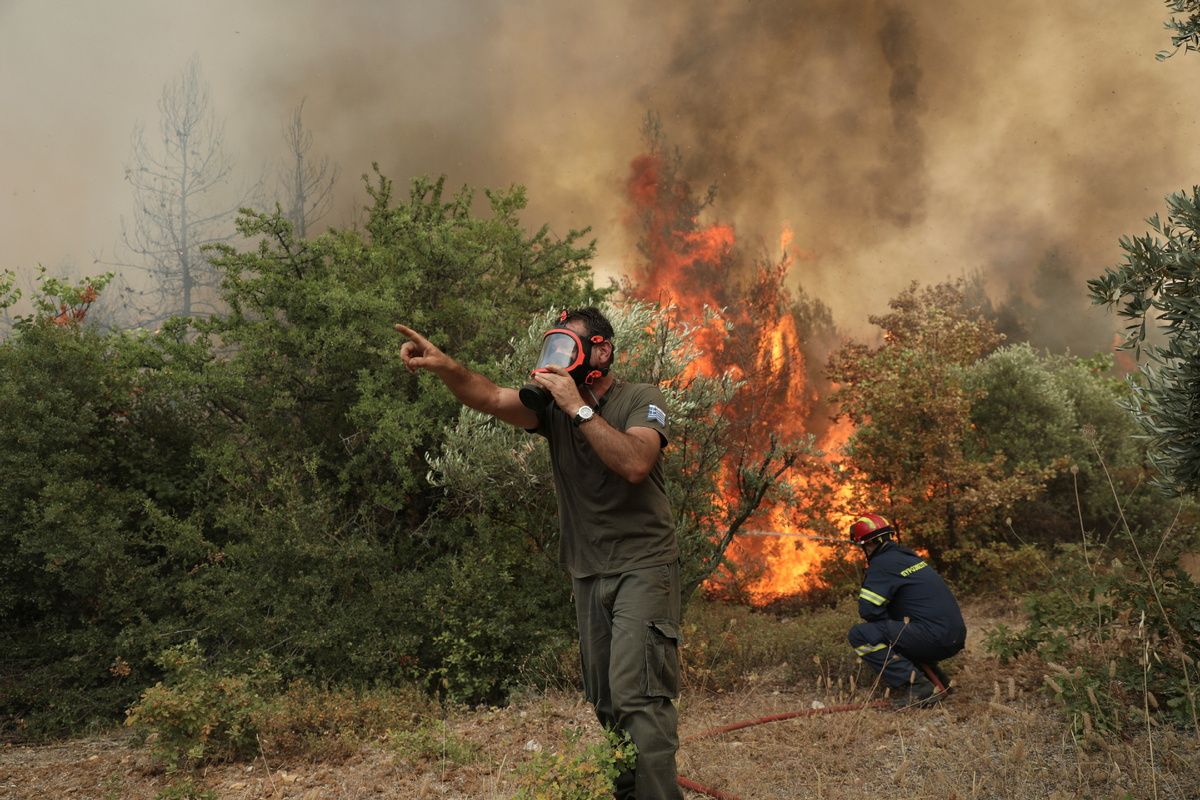 Firefighters try to extinguish a fire in the village of Avgaria, on the island of Evia, Greece, on Aug 10, 2021. [Photo/Agencies]

A summer of intense heat and drought has led to wildfires across southern Europe and surrounding regions, with flames tearing through forests and destroying homes in such countries as Greece, Italy, Turkey and France.

Scorching temperatures in Sicily reportedly saw the mercury rise to a record 48.8 C, which, if confirmed by the World Meteorological Organization, will break the previous European record of 48 C in Athens in 1977.

Experts say the intense heat waves and fires are linked to climate change, and that extreme weather will only get worse in coming years.

"Our carbon emissions have caused global heating, and that has changed weather patterns, making these extremes more intense and more frequent," said Deirdre McKay, professor of sustainable development at Keele University in Staffordshire, United Kingdom. "So in the Northern Hemisphere, in the summer, we are seeing these persistent heat domes, like the one that has been stuck over the northwestern United States and Canada. And now there's a heat dome over Europe."

Heat domes are areas of high pressure that stay over a large part of a region for days or even weeks, trapping very warm air underneath.

While August is normally hot and dry in the Mediterranean region, the temperatures this summer are extreme, according to the World Meteorological Organization.

McKay said, "The reason you get heat domes is ocean warming over the previous winter." While heat domes are fairly common in temperate zones, they're becoming more common and increasingly intense.

"The heat dome stuck over Greece, Italy and Turkey is now producing wildfires. That's because the jet stream in the atmosphere shifts seasonally, and right now it's dipped south across Western Europe," McKay said. "That dip has created a ridge of high pressure over the southeast of Europe. Warm air moving up from the Sahara which is carrying dust has contributed to a big hot air mass that's been parked over southeast Europe, making the temperature 10 to 15 degrees hotter than average."

The summer of 2021 has seen several severe heatwaves across the world. Some in parts of the Northern Hemisphere are unprecedented, including in British Columbia, Canada, where temperatures reached 40.6 C.

Peter Stott, who leads the climate monitoring and attribution team at the Meteorological Office, which is the UK's national weather service, predicted even higher temperatures ahead.

"The chances each summer of seeing really extreme temperatures are pretty high now," Stott said. "We can't say exactly when it is likely to happen, but Europe will need to prepare for the eventuality of further records being broken with temperatures above 50 C being possible in Europe in future, most likely close to the Mediterranean, where the influence of hot air from North Africa is strongest."

The global temperature is around 1.1 C higher than that of the preindustrial period, but some regions have seen their average temperature increase by a greater amount.

Climate change has also driven heavy rainfall and flooding, wreaking havoc in parts of Europe and elsewhere around the world.

The World Meteorological Organization said that climate change has made the occurrence of extreme rainfall up to nine times more likely.

More than 200 people died in floods in Belgium and Germany after extreme rainfall hit Western Europe in July. Over 90 millimeters of rain was recorded in a single day around the Ahr and Erft rivers in Germany.

"These floods have shown us that even developed countries are not safe from the severe impacts of extreme weather that we have seen and known to get worse with climate change," said Friederike Otto, associate director of the Environmental Change Institute at the University of Oxford. "This is an urgent global challenge and we need to step up to it. The science is clear and has been for years."

McKay, the Keele University professor, said that extreme weather conditions and large areas of intensely human-modified landscapes have contributed to the flooding.

"You have more paving, and that means greater volumes of runoff in extreme rainfall events. That's because there is just less exposed soil or vegetation to absorb the water. In some places, you have rain that's falling on uplands which are already suffering from deforestation."

"The deforested areas may be growing new crops. The land cover is not the spongelike forest that we had 400 years ago, and people have been chipping away at the forest's edges, too," McKay said. "So you've got a lot of water coming down at once from a massive amount of rainfall and it can't go where it usually would."