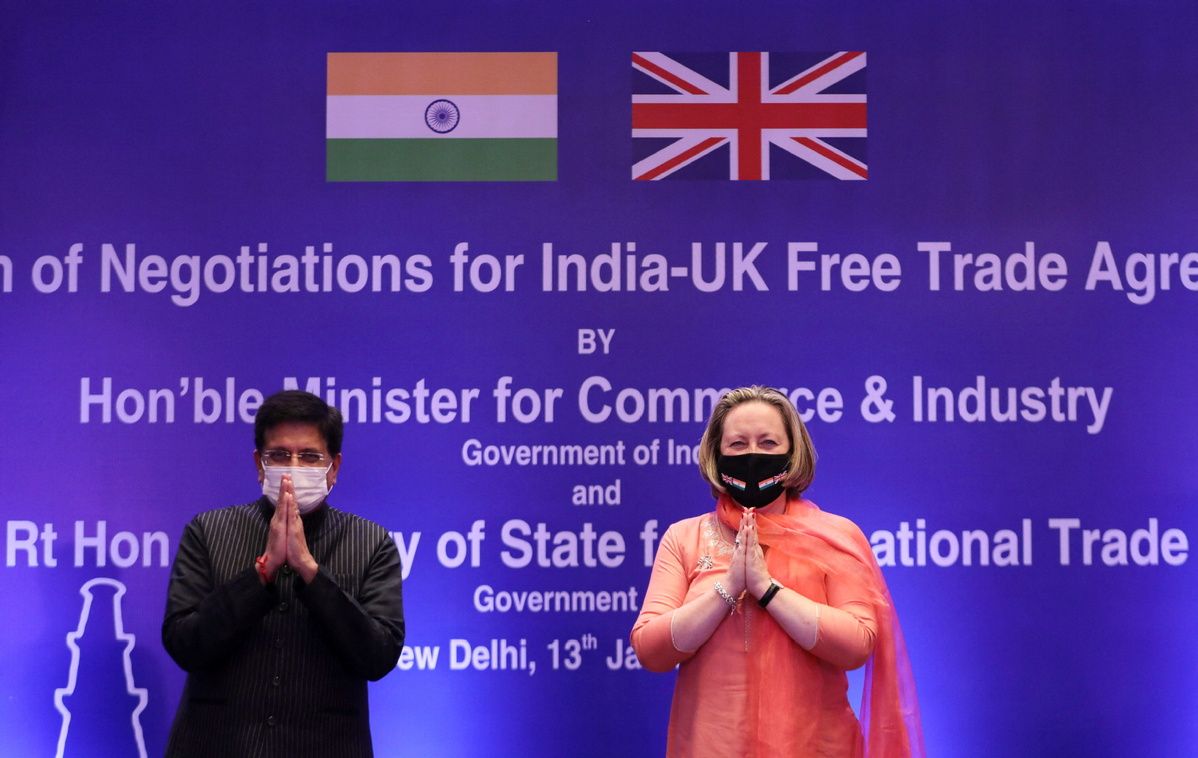 India's Minister of Commerce and Industry, Piyush Goyal (left), and British Secretary of State for International Trade Anne-Marie Trevelyan pose for a picture during the launch of free trade agreement (FTA) negotiations between the United Kingdom and India during an event at a hotel in New Delhi, India, Jan 13, 2022. [Photo/Agencies]

Britain's international trade secretary has said "everything is on the table to discuss" as negotiations begin with India, the largest country with which the United Kingdom has so far sought a post-Brexit free trade deal.

Anne-Marie Trevelyan will have talks with India's commerce minister Piyush Goyal on Thursday. She told the Financial Times that her team had "a broad mandate to crack on from Cabinet" to discuss all topics, including India's hopes to secure easier visa access for students and skilled workers.

The United Kingdom and India have long-standing historical ties, and there are an estimated 1.5 million people of Indian origin living in the UK.

India has a population of 1.4 billion but trade between the countries, worth 18.5 billion pounds ($25.4 billion) in 2020, has been stagnant over the last decade, and the British side has set the ambitious target of raising the figure to 50 billion pounds by 2030.

"Everything is on the table to discuss. Completely," Trevelyan told the newspaper. "At the end of the day, I will take back to cabinet a deal which I think is great for UK businesses and provides opportunities for them to see trade and investment growth going forward."

A free trade deal with India has been high on the British government's agenda since the Brexit referendum of 2016, but remains elusive.

In November 2016, then newly-installed prime minister Theresa May visited the country, but the issue of freedom of movement, one of the main motivating forces behind Brexit, soon emerged as a significant obstacle.

"Whenever you talk about any free trade deal, it's not just about tariff s; it's about the movement of people as well," Karan Bilimoria, the founder of Cobra, an Indian beer brand manufactured in the UK, told the Politico website at the time.

"We have such low unemployment (in the UK) that we need a foreign workforce ... to enable us to function as an economy and grow and prosper."

In April 2021, despite heavy criticism because of the country's coronavirus situation, May's successor Boris Johnson planned to visit India for trade talks, only to cancel his trip on safety grounds at the last moment. Instead, Johnson and his Indian counterpart Narendra Modi had a virtual summit, which resulted in closer trade ties and what the Guardian newspaper called a "pathway towards a new free trade deal".

Both countries are scheduled to have general elections in 2024 so it is hoped a deal could be agreed in 2023, but the issue of visas remains an obstacle.

Much of Brexit was sold on a promise to take control of immigration, and the ending of freedom of movement for workers from the EU.

In Parliament earlier this month, one Conservative member, Edward Leigh, said the country "should not be held to ransom" by India in pursuit of a trade deal.

Leigh's constituency is in Lincolnshire, which recorded some of the highest votes to leave the EU anywhere in the country in the referendum.

"Would (the prime minister) agree with me that our new working class voters who voted Brexit did not vote to replace immigration from Europe with more immigration from the rest of the world, any more than when they were told that they would take back control we would lose control of the channels?," he said.