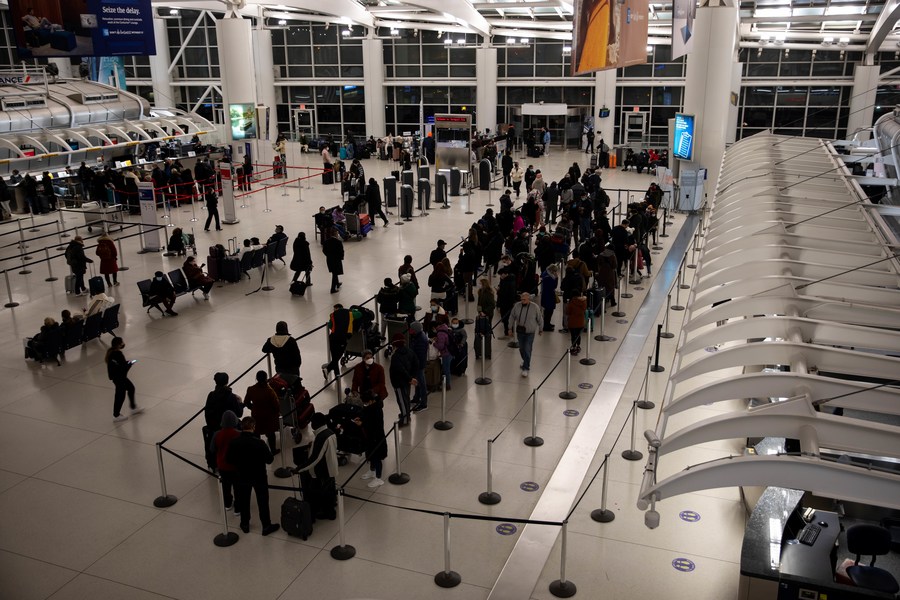 The Omicron variant surges across the United States, sending COVID-19 case counts to new heights and disrupting daily life as well as the economy.

NEW YORK, Jan. 16 (Xinhua) -- The Omicron variant of COVID-19 is fueling the biggest infection wave and hampering economic recovery in the United States, as reflected in the cancellation of thousands of flights by major U.S. airlines and the unbridled annual inflation which surged to an almost 40-year high in December.

"January's been a wild month, and it's only half over. The spread of Omicron infections across the world is causing millions of Americans to isolate again like it's 2020," reported Business Insider on Saturday. Workers are staying home sick, and others are continuing to avoid the workforce for fear of the virus.

"As Omicron peaks, service may be slower at understaffed stores this month. Or, if companies have resumed pre-pandemic practices, employees at your local restaurant or grocery store might be working with COVID-19," said the report, noting that though vaccines have become available throughout the country, Omicron evades vaccine protection more than previous variants.

Citigroup Inc. is sticking with its COVID-19 vaccine mandate for its U.S. workers, while General Electric Co. (GE) is not -- "the two American companies are going in opposite directions after the Supreme Court blocked on Thursday the Joe Biden administration's rule that big employers require their employees to get vaccines or submit to testing," reported The Wall Street Journal on Saturday.

Citigroup, which has about 65,000 employees in the United States, said that it had reached 99 percent compliance one day before the Jan. 14 deadline the bank had set for U.S. workers to get vaccinated or request an accommodation for medical or religious reasons. "Our goal has always been to keep everyone at Citi, and we sincerely hope all of our colleagues take action to comply," said the company's human-resources chief Sara Wechter.

At the start of 2021, GE had about 56,000 employees in the United States. It originally told them they were required to get vaccinated or seek a religious or medical accommodation by early December. It suspended that policy in December after a court challenge temporarily blocked the rule for federal contractors. On Friday, GE suspended its remaining COVID-19 vaccine requirements. 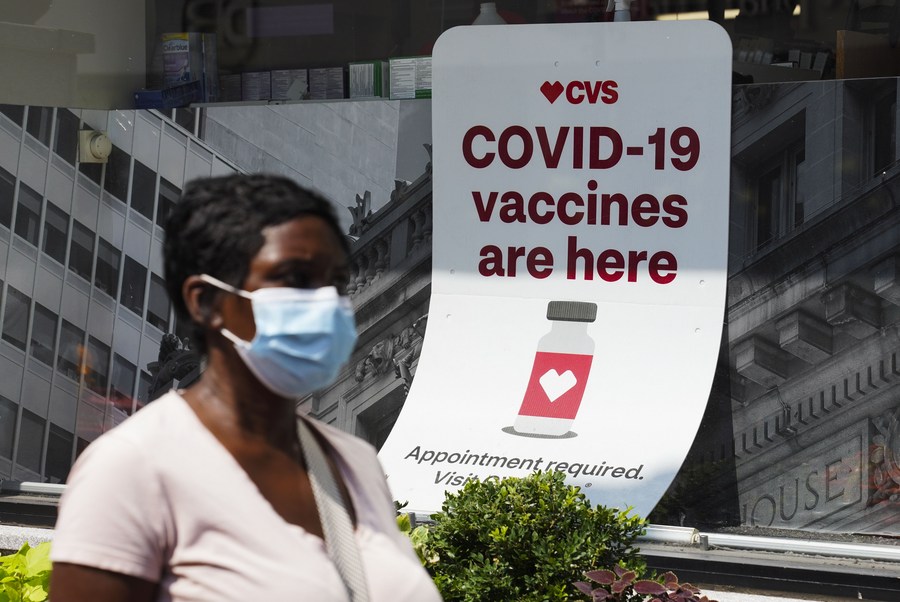 A person walks past a sign of COVID-19 vaccination at a CVS pharmacy in New York, the United States, Aug. 11, 2021. (Xinhua/Wang Ying)

CVS and Walgreens, two of the biggest pharmacy chains in the United States, are temporarily closing some stores this weekend because of staff shortages complicated by the soaring number of people infected with the Omicron variant, reported The New York Times (NYT) on Saturday.

Mike DeAngelis, a spokesman for CVS, said the "vast majority" of stores were operating with normal hours this weekend. There are more than 9,900 CVS stores across the United States. "A tiny fraction of stores are temporarily closed on one or both days of the weekend to help address acute staffing issues," he said.

Rebekah Pajak, a spokeswoman for Walgreens, said closures were at a "small percentage" of the company's more than 9,000 stores and in most cases, the affected stores would be open at least one weekend day. "When making the difficult decision to adjust store hours, we make every effort to minimize disruption for our customers," she said. 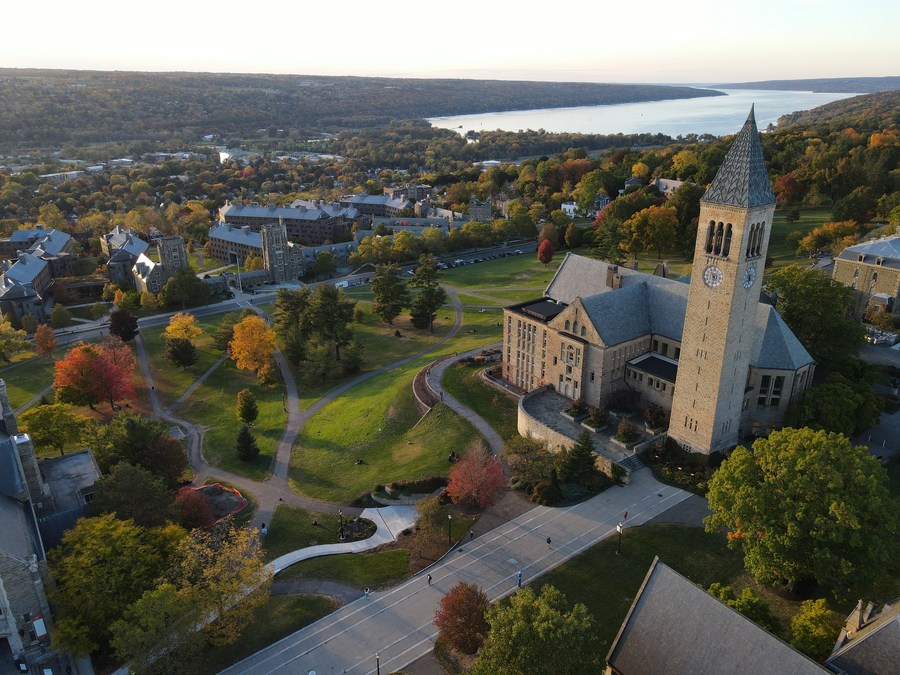 Undated photo shows an overview of the main campus of Cornell University in New York State, the United States. (Courtesy of cornell.edu)

As the Omicron surge spreads across the country, which sends COVID-19 case counts to new heights and disrupts daily life, some U.S. universities are preparing for a new phase of the pandemic, one that acknowledges the virus is here to stay and requires a rethinking of how to handle life on campus, reported NYT on Sunday.

Universities from Northeastern in Boston to the University of California-Davis have begun to discuss COVID-19 in "endemic" terms, a shift from reacting to each spike of cases as a crisis to the reality of living with it daily. "I think we're in a period of transition, hopefully to an endemic phase," said Martha Pollack, president of Cornell University.

Meanwhile, "most universities are still acting with caution. They are delaying the start of in-person classes and warning students that case counts could explode because of Omicron. They are encouraging, if not requiring, students to get booster shots. Many are handing out self-testing kits and KN95 masks," said the report.  ■